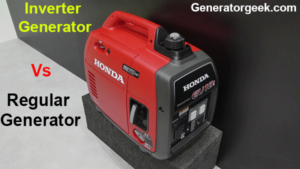 What is a Regular Generator?

A regular generator, also known as a conventional generator, is a type of generator that uses gasoline, diesel, or propane as fuel to generate electricity. The electricity is produced by an engine that rotates a generator head, which in turn generates the electricity. Regular generators are relatively simple in design and are typically used for a variety of applications such as powering construction sites, recreational vehicles, and homes during power outages.

What is an Inverter Generator?

An inverter generator is a type of generator that converts DC power produced by the generator into AC power. This is done by using a device called an inverter. The inverter allows the generator to produce a stable and consistent flow of power, making it suitable for sensitive electronic equipment such as laptops, smartphones, and televisions. Inverter generators are typically smaller and more portable than regular generators, making them a popular choice for camping, tailgating, and other outdoor activities.

Inverter generators and regular generators are both popular options for generating power, but they have some significant differences. Regular generators are typically more powerful and less expensive, making them a great option for powering construction sites and large appliances. Inverter generators, on the other hand, are more portable, fuel-efficient, and produce stable and consistent power, making them a great option for powering sensitive electronic equipment and outdoor activities.

It’s important to consider factors such as your budget, the duration of power backup you require, the type of appliances you need to power and your need for portability when making a decision. Overall, both types of generators can be useful in different scenarios and it’s best to weigh the pros and cons of each before making a final decision.

Affiliate Disclosure: As an Amazon Associate I earn from qualifying purchases.