A power inverter is an electronic device that converts the direct current to an alternating current. The input, output voltage, frequency, and other power system depends on the design of the inverter. The capacity of a power inverter could be measured by its watts, such as 400, 800, 1000 & more power watts inverter.

What will a 400 watt power inverter run?

If you have a 400 watts power inverter, then it will convert the power of the battery into 120-V-AC. It gives you super freedom & the ability to charge up your house/office equipment & other personal items of your vehicle. With 400 power watts inverter, you can enjoy a lot of advantages.

For example, it can run a small television, refrigerator, tablets, laptop, power tools, cameras, DVD player, etc. Now here in this section, I am going to list some daily use equipment & standard accessories that you can run with a 400 power inverter.

There is rarely any house that you’ll find without a television. Almost every home has this equipment. Most tv lovers have some favorites show now if there is a load-shedding that occurred during the time of their favorite show, they will indeed become mad. The problem could be solved with a 400 watts power inverter because most of the television uses 80 to 400 watts of power.

It is quite impossible to spend a couple of minutes without a fan during the summertime. The best part of a ceiling fan is it consumes very less energy than an air conditioner. Most of the ceiling fan needs 50 to 120 watts of energy to run. So if you have a 400 power inverter, then your household fan can smoothly run with this.

The rate of power consumption of a laptop depends on the size of the screen. Then again, a small size laptop consumes on average 50, and a large one may consume around 100 watts. So if you have a 400 watts power inverter, you can run your laptop with it without any tension.

Is it possible for you to spend half an hour without your cell-phones? Surely the answer will be no. The good news is with a 400 watts power inverter; you can easily charge your cell phones.

Because on your device list, a cellphone is the only item that takes less power than any other device. Usually, a cell phone consumes 2 to 6 watts to fully charged.

Today’s lights are consuming less energy because of their high energy-saving capabilities. So with a 400 watts inverter, you can easily run your bulbs and light.

A freezer is one of the most needed equipment in today’s kitchen. The average power consumed by a freezer is 300 to 350 watts. So if you have a 400 watts power inverter, then you can easily run a freezer.

Things to Consider When Choosing a 400 Watt power Inverter 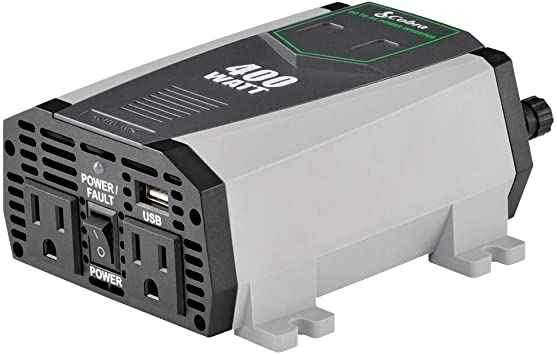 Purchasing a power inverter is one of the significant decisions that you make. Cause the life cycle of your electronic appliance depends on it, such as television, freezer, lights, fans, laptop, etc. So before choosing a 400-watt power inverter for your home/office or outdoor use, there are some factors that you should consider.

Before purchasing a 400 watts power inverter, people asked a lot of questions. Here in this section, I have included some questions and answer that people frequently asked about a power inverter.

Can a 400 watt inverter run a microwave?

Sadly, the answer is no. Because the minimum power needed by microwaves to heat the chamber is more significant than 400 watts.

How many amps will a 400 watt inverter handle?

You can get approximately 20 to 30 cycles of run time, on average two to three hours with a 12-volt battery and 400 watts inverter.

Hi, I am James Velasco, and this is my website about power backup machinery. Recently I find that the power cut off problem occurs most frequently and it harms your valuable machinery and we failed to take the right decision to solve this problem. This site will introduce you to all kinds of power backup machine-like generators, inverters, and etc. that will solve your power cut off problems and make your life easier than before.

Diesel & Portable Generator: How Many Hours Will a Generator Last?

Can a Generator Damage a Refrigerator? In-depth Guideline 2020